How do I create a DIY “crowdfunding” campaign using Shopify?When you use Shopify to build a “direct-to-fan” campaign, you turn your crowdfunding campaign into a storefront. You make money from what you sell, regardless if your campaign reaches its goal. You’re effectively running a pre-order campaign.We'll look at what makes up a crowdfunding campaign and how you can recreate virtually every feature within Shopify.While our past blog post discussed why you may want to run your next crowdfunding campaign using an ecommerce platform rather than a dedicated crowdfunding platform, this support article shows you how to do it.Every campaign starts with an artist defining a goal (record an album, fund a tour etc), then setting up various tiers as opportunities for fans to help accomplish it. This isn’t some mysterious thing that only dedicated platforms can pull off. Instead, crowdfunding is accessible to anyone.Key parts of a PledgeMusic campaign:Intro videoFundraising goal & visual representation of goal being metCreation of product bundles or "tiers"Final upload of digital music, closing campaign - artist is sent funds (or not)Customer data exported from crowdfunding platform for artist to fulfill ordersCustomer support assists with digital downloads, directs fans back to the campaign owner for questions about physical productsThe Jumpstart ThemeThis free theme recreates the look and feel of popular crowdfunding platforms. The theme was built to be a complement to a crowdfunding campaign ran on a traditional platform. However, Shopify is so full featured that they inadvertently created a complete replacement for these platforms.The default first section of this theme wide-screen introduction video. This is where you introduce your goal and project to your fans.

The next section is a dedicated “Campaign Tracker”. This is where you'll define your goal's dollar amount and keep fans updated with your progress.

We've quickly stumbled upon the first (and only?) real limitation with running your campaign DIY. Whereas Pledge will automatically update your progress bar, you'll have to do this manually. We'd suggest updating your progress each morning. As your campaign progresses, you can see totals in the analytics tab inside of your Shopify admin.Product TiersNow it’s time to define the various levels of contribution to your campaign. This is done in your Shopify admin by creating different product bundles. For example, to create some of the lower tier bundles, name some products “T-Shirt + Digital Album Bundle” and “T-Shirt + Hoodie + Digital Album Bundle”. Below is a real life example from the independent rock band Felicity. 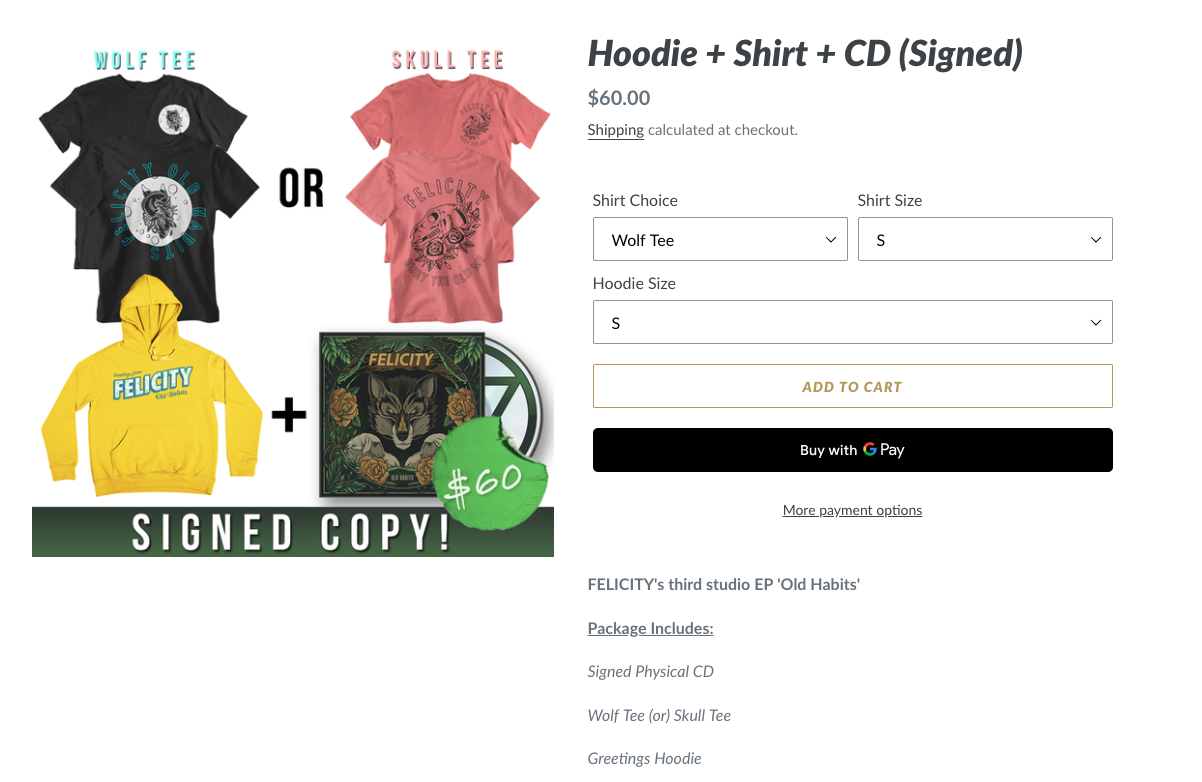 Note: Be sure to write in the product description that it is a pre-sale. This way your customers will know not to expect the product bundle until after the campaign is complete. Be as transparent as possible! Let them know the date the campaign will be over and when they should expect the products to arrive.Digital Album BundlingIf your campaign is raising money to create an album, you won’t have the files or much metadata for the album when you are creating the campaign. Pledge functions a little differently than Shopify + Single in this regard. After your pledge-powered campaign is complete, you upload your digital album and that officially closes the campaign. To learn how to start a pre-sale using Shopify + Single before your album is complete, check out this support article.Customer SupportWe’ve been frequently asked about how customer support is handled within a Shopify-powered crowdfunding campaign.Single powers digital downloads for your campaign, so our support team can help fans download your music. Or, if you’d like to handle customer support independently, we’ve built tools for you to do so.Because this is a DIY campaign, any other customer inquiries will be directed back to you. While this may be perceived as a downside to a DIY campaign, we’d like to take a closer look at exactly what Pledge customer support does.When a Pledge campaign is completed, the artist is responsible for fulfilling all of the orders. The official verbiage from Pledge is, “We have our very own fulfillment system in the back end that will help you stay organized as you ship items out to your pledgers”. They go on to say, "We even have fulfillment partners who can take on the manufacture of fulfillment of your goods".This same list of orders can be found in the Analytics tab inside your Shopify admin, and you can integrate with 3rd party fulfillment companies via the Shopify app store.The other side of customer support is assisting an artist building their campaign. Unlike Pledge, Shopify doesn't provide a "campaign manager" to help you create your crowdfunding campaign. There is however a Shopify Help Center that is packed full of resources to help you build out your store.Specific questions about creating your DIY campaign? Talk to us! We're happy to help.- The Single Team

Was this article helpful?